A New Era of American Architectural Concrete: From Wright to SOM 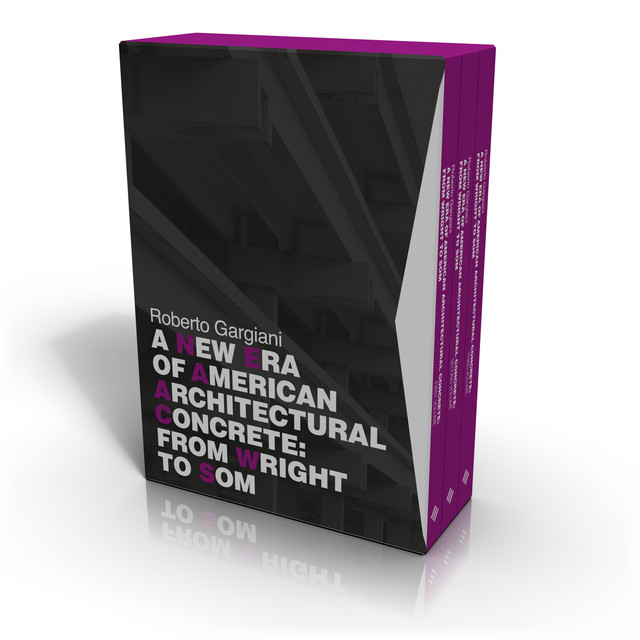 A New Era of American Architectural Concrete: From Wright to SOM

The affirmation of reinforced concrete and the kinds of space generated by its structures is one of the most fascinating and revolutionary chapters in the history of twentieth century architecture and engineering. This richly illustrated, three-volume essay, New Era of American Architectural Concrete: From Wright to SOM offers the first complete overview of all the most significant research conducted in concrete in the United States of America from 1940 to 1970, in which the greatest architects of the time were involved including Frank Lloyd Wright, I.M. Pei, Louis Kahn, Paul Rudolf, Eero Saarinen, Bertrand Goldberg, Mies van der Rohe, Myron Goldsmith, Marcel Breuer, Skidmore Owings & Merril, Walter Gropius, Roche-Dinkeloo, Minoru Yamasaki, Harrison & Abramovitz, William Pereira, Emery Roth & Sons, and others.

The analysis of the works presented on the pages of the three books reconstructs the most important inventions in the use of concrete, whether reinforced or not, prefabricated or cast in place, used in the form of skeleton, walls, columns, blocks or panels. The book leads readers to the discovery of shells, from those of Wallace Neff to those of Frederick John Kiesler, John M. Johansen, Eduardo Catalano, Harrison & Abramovitz or Marcel Breuer, and to the various experiments and applications of Gunite; it then gives an introduction to the understanding of the processes of self-construction made possible by innovative technical solutions, from the “desert concrete” of Frank Lloyd Wright, to the earth-cast concrete of Paolo Soleri, or the kind of concrete masonry of the “aggregate rubble” of Eero Saarinen; it provides the critical tools and technical data to dive into the meanings of the masterpieces of Bertrand Goldberg, Roche-Dinkeloo or Philip Johnson, raised with colossal hollow columns thanks to slip forms; and it allows readers to follow the phases of the invention of the Lift-Slab method and its multiple applications, up to the works of Mies van der Rohe and his disciples. Through the pages of the book, readers will discover the birth and evolution of the most ingenious structural devices for the construction of reinforced concrete skyscrapers, through the analysis of the works and projects of Mies, SOM, Wright, Kahn, Saarinen or Pei; readers are introduced to the analysis of decisive contributions made by engineers such as Fred Severud, Tung-Yen Lin, Fazlur Rahman Khan, Frank J. Kornacker, August Komendant, Keast & Hood, Weinberg, Ammann & Whitney, Richard Bradshaw, William James LeMessurier, Weiskopf & Pickworth; the book also allows readers to learn about the role played by construction companies such as George A. Fuller Company or associations such as the Atlantic Prestressed Concrete Company.

The book also includes a chapter on a new kind of ornament, permitted by special plastic products applied to formwork, and other chapters dedicated to the different processing techniques to obtain various surface textures, from the bush-hammering of Marcel Breuer and Anshen & Allen, to the corduroy concrete of Paul Rudolph; it enters the complex theoretical universe of truths and lies, upon which the greatest architects have debated through the manipulation of concrete; finally it guides the readers up to the temporary decline of the creative force of structures, a decline marked by the theoretical statements of Peter Eisenman and Robert Venturi, and the advent of post-modernism. These are some of the topics discussed in New Era of American Architectural Concrete, which not only offers a first exhaustive history of a technique that was decisive in the United States, but also a new vision of twentieth century American architecture.

From the same author

The Rhetoric of Pier Luigi Nervi Concrete and Ferrocement Forms

In the same collection

Gardens of War British Cemeteries on the Western Front

Choosing Architecture Criticism, History and Theory since the 19th Century

The Carpenter and the Architect

Gardens of War British Cemeteries on the Western Front

The Rhetoric of Pier Luigi Nervi Concrete and Ferrocement Forms

When you browse our website, information may be recorded or played back in your terminal to optimize your experience.